So as longtime readers are aware, I’ve been working for the past year or so on a scrapbook digitization project at Northeastern University’s Archives and Special Collections. I started at Northeastern in the fall of 2008 as a processing intern and have been there in one capacity or another since (I was just recently hired as a part-time Archives Assistant, in which capacity I get paid to do reference work and processing). Anyway, the scrapbook thing has been a very very part-time gig, but lots of fun because I get to look at photographs of young women doing turn-of-the-(twentieth)-century calisthenics in woolen jumpsuits and read turn-of-the-(twentieth)-century recipes for flapjacks.

Incidentally, if anyone knows what it meant to “go fussing” in 1910s-era Boston (as in: “I went out fussing at least once this past weekend”), let me know! Thus far, my investigations in slang dictionaries have failed.

So back to the content of Marjorie Bouve’s scrapbooks. This past week, I reached a run of playbills for dramas, operas, musical comedies and other theatrical entertainments engaged at Boston theatres from during the first few years of the twentieth century. I don’t have anything particularly insightful and/or deconstructionist to say about these — not being a theatre historian — but I did want to highlight a couple of gems for your amusement.

I was attempting to catalog these playbills in the scrapbook for our online database, and ran across one with no cover, simply the cast list and synopsis of acts, which read thusly (courtesy of Google Books) A search through Google for “spoopju land” (I mean really, how many can there be??) landed me this little gem by Mssrs. Gustav Luders and Frank Pixley, published in 1901. With the following table of contents The other intriguing play was one called “A Messanger from Mars,” which I happened to show to Hanna (who also works at Northeastern). She said it sounded familiar so I did a search and came up with this New York Times story covering the premier of the show in London 23 November 1899. 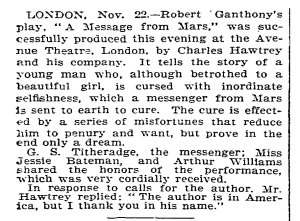 The London production starred the same actor, Charles Hawtrey, who performed in the touring production Marjorie Bouve saw in Boston in 1903. Hawtrey later went on to star in the 1913 silent film version, which is what was niggling at Hanna’s memory when she saw the title.

Every so often, I step back from idle exploratory searches like this — searches that took me about naught-five seconds to perform at my workstation while I was waiting for my database to back up the data I’d entered — and remember that time Before The Internets (yes, I’m definitely old enough to remember B.T.I.) when this kind of thing would have required, at bare minimum, a trip to the local public library or (in this case) upstairs to the regular research library stacks, where you’d hope they had something in a book somewhere about one of these plays. An index to twentieth-century American theater that would point you toward the writer, which in turn might (if you were lucky) point you toward the actual play. Eventually.

It’s hard to hate Google too much, despite their octopoidal presence, when they make it possible to explore these works from anywhere you have access to the world wide web.

2 thoughts on “theatrical amusements, circa. 1910s”