So I’m still getting used to using my tumblr account as a way to share links. It’s a really strange hybrid of Google Reader (through which I get aggregated blog stories from the various blogs I follow, can share and comment on them to friends who also use the Reader), Blogger (wherein, as now, I generate original content in the form of fully-developed blog posts) and Twitter (where thoughts, exchanges, and links are limited to 140 characters).

One of the oddest features of the tumblr interface is that when you post something to a tumblr blog, people who want to respond to what you share have only two options: to “like” the post or to “reblog” it, or quote the post in part or in full, with or without additional commentary. There is no comment feature, so conversations bounce back and forth between tumblr blogs in a very disconcerting way. At least, disconcerting for me.

An example from this past week. 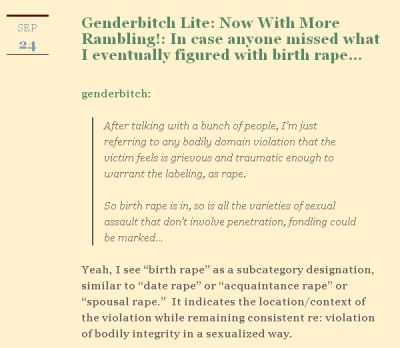 Yesterday morning, I “reblogged” a post from a blogger named genderbitch about the birth rape language discussion/intra-feminist controversy and added some further thoughts of my own. genderbitch reblogged that post with comments/responses of her own, which in turn I wanted to respond to. And the only way I could respond was to reblog the post again. And again. And again. Until, I feel, the two of us got into an incredible tangle of mis-communication (about which there might be a more lengthy blog post coming next week … still not sure). This seems incredibly clunky. Tips from anyone with more tumblr experience than I are welcome … though perhaps the answer is just to limit my tumblr use to reblogging without my own added commentary!

And with that observation, here are a couple of my favorite tumblr stories from the week.

The Right to Bear

It’s not ‘babyish’ to find ways to self-soothe and to cultivate feelings of security: it’s human, and it’s smart. It’s not wrong to form attachments and dependencies and when it’s people and things that do not harm us, it’s actually desirable to do so. There is no prize for growing up the fastest, especially when growing up means shedding, or hiding, human vulnerabilities.

Toward a Taxonomy of Homophobia

and Suffrage On Stage: Marie Jenney Howe Parodies the Opposition

My first argument against suffrage is that the women would not use it if they had it. You couldn’t drive them to the polls. My second argument is, if the women were enfranchised they would neglect their homes, desert their families, and spend all their time at the polls. You may tell me that the polls are only open once a year. But I know women. They are creatures of habit. If you let them go to the polls once a year, they will hang round the polls all the rest of the time.