I’ve been meaning to write about the way safety is handled on the Simmons residence campus for a while now, but this photograph finally provoked me into action: 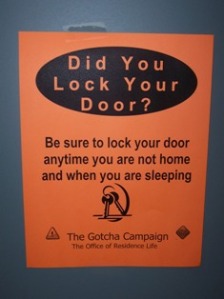 This poster, courtesy of the “gotcha” campaign, in which residence staff come around at random hours to check and see if dorm room doors are locked, is only the latest in a whole series of educational tactics students here at Simmons have been exposed to over the school year. We have also been warned against “piggybacking” (letting someone unknown into the dorm with your swipe card) with posters that describe in ominous terms incidences in which women have been raped and murdered by assailants in their dorm rooms because of an unlocked door.

We also receive campus safety alerts via email, which alert us to acts of aggression that happen in the neighborhood of the college. Each email concludes with a list of basic safety measures:

As always, the College is concerned for the safety of our community members. We recommend the following precautions to maximize your safety:

• Be aware of your surroundings
• Do not walk alone at night whenever possible
• Do not listen to your iPod while walking
• Always make sure to walk on well lit streets staying on the same side as the street lights
• Be aware of the people around you
• If you carry a cell phone, make sure the battery is charged and it is turned on
• If you are walking alone at night tell a friend when you are leaving and when you expect to arrive at your destination

If you see anything suspicious or would like a walking escort between campuses, please call the Simmons College Public Safety Department

While these emails are usually matter-of-fact and probably the best approach to keeping students informed about what is happening around the campus, I also wonder about the ubiquity of these awareness campaigns, and how they feed into a culture of fear about life in an urban environment–particularly life as a woman in an urban environment.

Clearly, as a woman in my mid-twenties, having lived and traveled alone in a variety of places, the question of personal safety is not a new one. And to some extent, I agree with the common-sense advice of the campus officials: it’s usually a good idea to keep your door locked (if for no other reason that the desire not to have someone steal your computer), and to “be aware of your surroundings.” However, it becomes a particularly interesting question to consider in the context of a college campus, surrounded by college-age women who are being sent particular messages about danger in the world and how they ought to protect themselves from it.

As a feminist, violence against women is something I am aware of in a political, philosophical, and personal sense. In feminist circles, we refer to a “rape schedule”–the idea that ability to move freely in the world is curtailed by our awareness of the possibility of physical violence. As Jessica Valenti explains in a Salon interview:

Can you explain the concept of a “rape schedule”?

I first heard about it in my women’s studies classes. It’s the idea that every woman in one way or another lives on a rape schedule. Every action you take is built on an awareness that you could be attacked: from walking with your keys in your hand, to locking your car doors at an intersection, to deciding to go home a half-hour earlier. There is no public space for women; the whole world is a prison where you have to be constantly aware at all times that you’re a potential victim. What’s more terrifying is that it’s not necessarily preventative. Most rapes are committed by people you know and trust and let your guard down with.

So there are concrete ways in which my being-in-the-world is limited because of the fact of my sex: I fantasize about going backpacking in the Adirondacks, for example, but solo camping in remote areas is out; and on the other extreme my freedom to move about urban environments after dark is a constant question mark.

On the other hand, feminists in the last twenty years have raised the question of how much the media spotlight on particular acts of violence (for example, random attacks by strangers) get highlighted while other acts of violence (such as those perpetrated by intimate partners, who presumably would have access to your dorm at your invitation) are not the focus of these scare campaigns.

Also, it is important to note the assumptions this email makes–particularly that it is possible to arrange to walk in company, and that you have an individual whom you can make aware of your daily movements. I don’t believe the advice not to walk alone would be a piece of advice offered to men as a matter of course. And I wonder what those of us who live alone are supposed to do? Call up our closest relative and tell them when we leave work in the evening? What’s with this “while you are sleeping” line in the “gotcha” poster? Coming, as it does, on the tail of flyers that describe the violent rape and murder of a young college girl in her bed while she was sleeping, there’s a definite over-tone not merely of material security against theft but also of sexual violence.

So I am troubled by the way in which women at Simmons college are constantly reminded of their vulnerability (however statistically unlikely) to violent attack. I wonder whether it is simple pragmatism, or whether it is schooling young women into a sense of danger that is, overall, misleading and socially controlling. Thoughts?