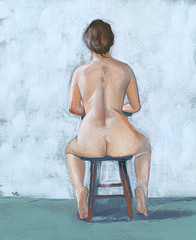 A couple of weeks ago, I rounded up a few links on policing “imperfect” bodies (women’s bodies in particular). Here are a few more.

Watching the blogosphere coverage of Susan Boyle’s performance on the Britain’s Got Talent television show has been an a thought-provoking and often intensely discomforting experience (as was watching the video itself, though she does indeed have a gorgeous voice and sings with her whole body). Here are blog posts and threads I found particularly spot-on with regards to what’s off about the hype.

1) The Pursuit of Harpyness asks whether Susan Boyle’s performance at Britain’s Got Talent and the freak-show aspect of media coverage surrounding it is “Heartwarming or Heartbreaking?”

2) via radishette: What he said. Nailed it.

3) Courtney Martin writes: “I don’t think the majority of us are really willing to look at the ugly scripts in our heads, the fat discrimination, the self-hate (oh so relate to our merciless judgment of others),” that the popularity of the Susan Boyle video draws out.

And then: I’ve written a lot about how ageism hurts young people, and specifically about the American obsession with teen sexuality. Now here’s a story about Massachusetts attempting to legislate against elder expressions of sexuality. The legislation is ostensibly to protect elders and disabled individuals from exploitation (a laudable goal), but has been carelessly and broadly worded. Not cool adopted state.

3 thoughts on “A few more links on bodies”