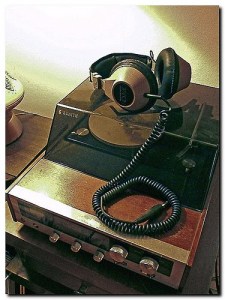 Last Monday, I spent seven hours at Northeastern entering metadata (“information about information”) into the Greenstone database for my scrapbook digitization project. Since this only really required the left side of my brain, I entertained the right side of my brain by listening to podcasts, NPR programming, and other miscellaneous audio programs. Here’s some of what I listened to.

I started out with the latest podcast from RhRealityCheck (25 minutes), which included a interesting interview with author Laura Scott, who is doing a survey/book/documentary project about couples who remain “childless by choice.” As Hanna remarked, do we really need a whole website to support the decision not to have kids? But she had some thoughtful observations and thankfully did not come across as defensive or hateful of children, which in my experience many people who identify themselves as “childfree” or “childless by choice” do — especially in the anonymous spaces of the internet.

Then came the week’s episode on Wait! Wait! Don’t Tell Me which included a great riff by the panelists on the new Twilight movie, New Moon, out in theatres this week: Who’s Carl This Time? (9 minutes)

From On the Media’s November 20 show came Online and Isolated?
(7 minutes, transcript after the jump):

Social scientists have long suspected that the internet contributes to our growing isolation. But Lee Rainie, director of the Pew Internet and American Life Project, set out to test that assumption. He says they found that Americans aren’t as isolated as we thought and that being active on the internet might actually help prevent social isolation.

Is the conservative right undergoing a transformation? Journalist David Weigel thinks so. Weigel covers the Republican party for the online magazine The Washington Independent, where he’s written about tea party protests, anti-health care activists, the “birther” movement and the recent Values Voter summit.