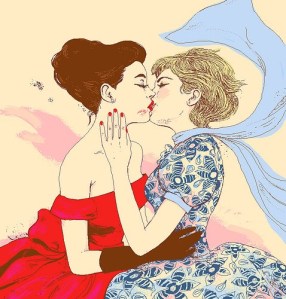 Incidentally, I am totally in love with this illustration (above) . . . I keep searching for nice pictures of women lovers on Flickr and this is the first time a search has actually yielded something I liked well enough to put on the Sunday Smut list. It’s an illustration for an article on lesbians in the Polish magazine Wysokie Obcasy (“High Heels”) which to my mind makes it even more awesome.

Speaking of women getting a little personal, there was a lot of angst this week about women showing emotion publically. Deborah Orr & Anne Perkins @ The Guardian both take women to task for such “feminine” displays of emotion as crying and giggling and sharing personal stories. Orr writes scathlingly of actress Gwyneth Paltrow’s recent disclosure that sometimes she cries at work while Anne Perkins derides female politicians for sharing personal anecdotes and giggling, suggesting “let’s keep the personal out of politics.” Aside from the obvious sexist double standard of equating femaleness with excessive emotion (who decides what’s excessive anyway??) I find it particularly offensive that Perkins co-opts the personal-political dyad of the feminist movement, in effect calling in coded language for the rejection of feminist sensibilities in political spaces. The suggestion that things associated with women are “unserious” is really irresponsible. And stupid to boot. Like me, Whitney Teal @ Women’s Rights Blog objected to this sudden hate on emotion, asking is crying at work so wrong? And in an article on “the art of confession,” Emily Gould @ New York Magazine points out that personal confessions are recieved differently by the public, depending on whether the confessor is male or female

If a woman writes about herself, she’s a narcissist. If a man does the same, he’s describing the human condition. But people seem to evaluate your work based on how much they relate to it, so it’s like, well, who’s the narcissist?

Why should you be able not only to have the freedom to raise whatever issue you want, but also have the privilege to do so without offending anyone? That simply is not how the world works — ideas, as they say, have consequences, and part of the consequences of raising controversial (or idiotic) arguments is that people will become annoyed, angry or offended. I don’t think that people have a right to not be offended, but you also definitely do not have a right to demand that other people accept without emotion whatever ridiculous or hateful argument you make.

I think this story ties in with the story I wrote about earlier this week involving the desire of homophobic petition signers to keep their identity secret for fear they would have to have “uncomfortable conversations” with people who did not share their views. Freedom of speech does not mean you have the right to speak up without anyone disagreeing with you, people! Just like protection from violence and harassment does not equal never having to have a tense conversation about politics. Grow up already, people!*

So possibly, the Washington Times should not be surprised when people get a little, well, emotional in response to an editorial (yes, as in written-by-and-endorsed-by-the-Times) titled “Discrimination Is Necessary: Subjecting Kids to Weirdos Undermines Decency” (I mean, really, can you get any more appallingly bigoted? in a major print publication? wtf?) Via CaitieCat @ Shakeville comes an open letter in response to the editoral which I highly recommend reading: “Let’s talk about the consequences of teaching children that cruelty is acceptable as long as the victim is ‘not normal.'” Another open letter on the subject of transphobia at the national level comes from Autumn Sandeen @ Pandagon who writes about her experience in the hands of law enforcement after being arrested for protesting DADT outside the White House.

Also on the subject of transphobia, and its intersections with other types of bigotry, Kate Borstein @ Out reflects on the outrage over a recently-released film titled Ticked-Off Trannies With Knives, while intersectionality of another sort is the subject of a thoughtful, open-ended discussion between Latoya and Thea @ Racialicious. Not being a fan of any sort of oppression olympics (people who claim “my pain is more exquisite than your pain!” as a way of shutting someone up), I highly recommend the piece, even though it doesn’t offer simple solutions.

Women and breasts were also a popular topic this week, perhaps a side effect of the much-discussed “boobquake” protest? The protest’s originator, Jennifer McCreight @ The Guardian entertained us with what she learned from her quasi-scientific experiment; Amanda Hess @ The Sexist interviewed blogger C.l. Minou (The Second Awakening) about breast augmentation and feminine beauty standards while Rebecca @ The Thang Blog shares a conversation she had with her dad (a civil rights lawyer) about the possibility of getting herself arrested while going topless in public.

Two adoption-related blog posts this week, one from Harriet Jacobs @ Fugitivus, speaking out passionately in defense of her belief that adoption is always the second-best option, and Jill @ Feministe writes in defense of single fathers’ parental rights.

In other “think of the children!” news, Sinclair @Sugarbutch Chronicles shares some thoughts on why sex education is still a radical, controversial act and Margaret Eby @ Salon suggest that, despite hysteria in certain quarters preteen girls are not yet harlots. (Sad! Because “harlot” is an underutilized word).

Hanna Seligson @ The Wall Street Journal reports on the emerging ritual of pre-planned marriage proposals, where couples stage a proposal as if it were a surprise, even though they have had extensive discussions beforehand. I’m gonna admit right up front I don’t understand this: if you want to have an engagement party, awesome! But why stage this fake surprise where the man — and in hetero couples it always seems to be the man — “pops the question” to the woman, and she feigns surprise? Seligson has some intriguing theories, even though I’m not sure I agree with her in the final analysis.

And finally, congrats to Feministing’s founder Jessica and her partner Andrew who are expecting their first child on election day this November. I hope for you a nice, long bubble of privacy as you adjust to being a new iteration of your family together.

*Hanna points out that it is unclear whether the email (and original remarks) were intended to be between friends or sent out to a more public audience — say a study group — and how they ended up being made public. Jill’s point, however, is that having become public for whatever reason, the email is a legitimate subject of debate, as is Ms. Grace’s reasoning re: race and its implications for her legal work.