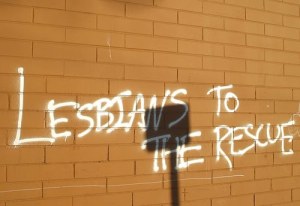 People of the non-straight variety are having some issues with the “alphabet soup” practice of labeling, as in “LGBT-friendly” or “LGBTQ activism.” In the most recent issue of Bitch magazine, R.F. McCann asks whether “lesbian” is going out of fashion

It makes sense that the straight public and mass media have latched onto “gay” as their go-to term; it’s short, largely inoffensive, and widely understood, making it ideal for headlines, soundbites, and voluble public discourse. While “homosexual” is overly formal (not to mention long) and “queer” strikes some as harsh, “gay” is perky, conveniently monosyllabic, purportedly gender-neutral, and certainly less racy-sounding than “lesbian,” with its silky “zzz” sound. But why exactly has the nonstraight population allowed “gay” to slide so comfortably into ubiquity? Surely the lesbian—scratch that—gay female community could put up a fight if it wanted to. But it doesn’t seem to want to. Are women bored with the word? Do they dislike it? Have labels simply become less relevant?

While McCann’s article is openly inquisitive, seeking to document trends in language usage John Aravosis @ AMERICAblog Gay is arguing for activists to resist inclusive acronyms such as LGBT in place of the “perky, conveniently monosyllabic” (as McCann writes) word “gay” (hat tip to Amanda Hess @ The Sexist). He writes in I’m not an ‘LGBT American’

I think LGBT is a cop out for straight people. Much easier for a politician to laud the LGBT community than the GAY community, because no one outside of the gay community knows what the LGBT community even is. I’ve seen signs at rallies proclaiming something or other about “LGBT”, and I’ll bet everyone at the rally who wasn’t gay was scratching their head. In an effort to be more inclusive, we’ve shoved ourselves back into a sort of linguistic closet.

If we’re all one community, then we don’t need to keep adding letters to divide us.

Hanna and I have this conversation occasionally. I tend to err on the side of inclusivity and trying to be as accurate as possible in naming people with the labels they wish to be named; she tends to err on the side of what’s easiest to communicate in terms of an activist message (even I can’t always remember what the Q in LGBTQ is supposed to mean…!) and also expresses frustration with the need to label ourselves in the first place.

I’m definitely with her on the “it’s clumsy to say” issue and have found myself defaulting more and more to big umbrella terms like “queer,” “non-straight” and “gender nonconforming” when talking about human rights and social justice issues that intersect with sexual orientation and gender identity. I’m also of the fluid, mix-it-up generation (as much as I resist formulaic talk of generations), and variously include myself in groups of folks who identify as “bisexual,” “lesbian,” “non-straight” and “queer,” without the sense that I’m betraying the sisterhood by acknowledging that I’m not exclusively drawn to women in my sexual desiring, or denying my solidarity with a marginalized group by switching up how I identify. (Though I realize this fluidity is easier for individuals than it is for, say, nonprofit organizations that need to choose what terms will end up in the incorporation papers, on their promotional materials and web presence).

Here’s the thing. The bone I have to pick with Aravosis.

Want to argue for inclusivity with a word that helps us avoid the alphabet soup? Totally cool by me. But the solution to the alphabet soup problem is not to revert back to the word “gay.” Gay stopped being the go-to term for a reason, in that it was challenged as being exclusionary by people who do not feel the word (with its strong associations with male-identified homosexuality) really included them. “Gay” sort of, sometimes can include lesbian women (see McCann’s article above), in the way that many male-gendered terms can include female members of the human race. But the same isn’t true for “lesbian” (we sometimes say “gay men and women” but never “lesbian women and men”). Bi folks, of course, have are not exclusively gay and trans folks can be straight or gay or bi (which, really, is true for so many of us as we move through our lives — but that’s another issue entirely).

Arguing that the defult one-word term should be “gay” makes you sound like you’re not aware of this history, and of the reasons the term caused unhappiness within the non-straight community in the first place. If you’re going to pick “gay” as the catch-all term, you need to make a good case for why that word should win out over “lesbian” or “queer” or any of the other identity-labels that make up the alphabet-soup we’re currently stuck with. Gay isn’t the obvious default option, or it shouldn’t be.

Now, of course, in the end, all of this quasi-academic debate might not matter as much as shifts in usage, as McCann points out. As I’ve written about before, the English language, despite the fear-mongering of the Right over political correctness, has no “language police,” and the evolution of language ultimately happens through what words people choose to speak every day and what they understand those words to mean. But that shouldn’t stop us from having these conversations, and thinking about the implications of one usage ultimately winning out over another.

What terms do you like and dislike when it comes to sex- and gender-based identities? Which do you wish we could jettison entirely and which do you have inordinate fondness for? What words have you used to identify yourself and your communities in the past, and have those words changed over time? Why or why not? Feel free to share in the comments!

image credit: Lesbians to the Rescue by PinkMoose @ Flickr.com

4 thoughts on “why "gay" shouldn’t be the default term”