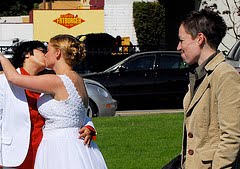 So after a weekend away from my RSS feeds, I finally got around, this morning, to reading conservative columnist Ross Douthat’s second column on why same-sex couples should be excluded from the institution of marriage. Adam Serwer @ The American Prospect offers his take which covers a lot of the bases. And Douthat’s justifications are so convoluted that I’m not going to try and untangle them here.

But as a queer woman in a lesbian relationship, there were a couple of … let’s call them interesting assumptions Douthat makes about fertility, gender, and marriage relationships that I’d like to briefly respond to.

Douthat realizes that he can’t credibly make the claim that marriage should be limited to couples capable of biological reproduction. As Judge Walker observed in the Prop 8 ruling (and as many other advocates of marriage equality have pointed out), being straight doesn’t equal being capable of, or interested in, bearing and raising children. We don’t ask straight couples to undergo fertility testing in advance of issuing marriage licenses. And we don’t enforce any sort of mandate that married couples produce genetically-related offspring.

So there’s that argument off the table.

But Douthat wants to make that argument anyway. So what he does is suggest that it’s not the physical act of bearing and raising biological children that makes hetero marriage particularly worthy of state sanction: instead, it’s the cultural experience of being heterosexual.

The interplay of fertility, reproductive impulses and gender differences in heterosexual relationships is, for want of a better word, “thick.” All straight relationships are intimately affected by this interplay in ways that gay relationships are not. (And I do mean all straight relationships. Because they’ve grown up and fallen in love as heterosexuals, the infertile straight couple will experience their inability to have children very differently than a same-sex couple does. Similarly, even two eighty-nine-year-old straights, falling in love in the nursing home, will be following relational patterns — and carrying baggage, no doubt, after eighty-nine years of heterosexual life! — laid down by the male-female reproductive difference.) This interplay’s existence is what makes it possible to generalize about the particular challenges of heterosexual relationships, and their particular promise as well. And the fact that this interplay determines how and when and whether the vast majority of new human beings come into the world is what makes it possible to argue — not necessarily convincingly, but at least plausibly! — that both state and society have a stronger interest in the mating rituals of heterosexuals than in those of gays and lesbians.

So it’s not about the capacity to reproduce, it’s about “fall[ing] in love as heterosexuals,” and “carrying baggage … after eighty-nine years of heterosexual life” based on “male-female reproductive difference.”

Obviously, there’s levels of wrong going on here, but the points I want to make are these.

1) As a queer woman, I am affected by the sex and gender norms of our (predominantly) heterosexual society. I was born into a world that expects certain things of girls and certain things of boys. In childhood, we aren’t categorized according to sexual orientation (since children are assumed to be nonsexual, or only latently sexual, beings — a topic for a whole different post) but by gender. Girls who aren’t exclusively straight in their sexual attractions nevertheless find themselves on the recieving end of powerful normalizing pressures concerning what girls/women should do, be, want, etc. This includes the pressure to parent. I think, perhaps, Douthat as a straight man might be underestimating the way in which this pressure affects women, particularly, regardless of their sexual orientations. It’s a gender thing, not a sexual orientation thing.

2) Douthat’s understanding of heterosexual vs. homosexual pairings ignores the experience of everyone else. What about equality for folks who experience sexual fluidity, whose attractions change over the course of their lifetimes? What about trans folks whose experience of society’s gender expectations shifts over the course of their lifetimes? For many of us, the idea that one would experience eighty-nine years of either “heterosexual life” or “lesbian life” (check the box that applies to you) is meaningless. We approach our relationships (no matter the gender of the person we’re relating to) as ourselves, as persons whose sum total of experience doesn’t fit neatly into one category or the other. Douthat’s assumptions concerning the differences between straight folks and queer folks is based on the belief that one’s sexual attractions are either always same-sex or always other-sex, and that these attractions are stable throughout life. This is simply not the case for many people (again, particularly women, which once more leads me to wonder how much Douthat is speaking out of his own personal biases rather than any actual research and reflection).

Thus, Douthat’s distinction between the nature of “thick” heterosexual relationships and (“thin”?) queer ones completely falls apart based upon the lived experience of real human beings.

Finally, I want to tackle Douthat’s parting shot: that omg gay marriage will lead to polygamy:

The claim that gay wedlock will lead inexorably to polygamous marriages or incestuous marriages has never been all that credible, because there just isn’t a plausible constituency in the United States (Europe might be another matter) that’s going to start claiming those rights in the way gays are on the verge of claiming the right to marry one another. But it’s still striking how easily the logic of gay marriage can be extended to encompass all kinds of relationships that we definitely don’t want to call marriages.

I am clearly not the constituency Douthat is writing for in his column, because the question I have for him is: “relationships that we definitely don’t want to call marriage”? Who is this “we” you refer to? Please don’t include me in this claim! ‘Cause I refuse, as a queer woman in favor of marriage equality, to scapegoat polyamorous relationships. I don’t need to make poly relationships the Other (or incestuous relationships for that matter) in order to prove that same-sex monogamous couplings should be sanctioned by civil marriage. I’m for consensual, adult relationship commitments being recognized as marriages. Full stop. If that marriage includes more than two adults, then those adults should all be able to enter into the contract of marriage and have that marriage be recognized by our legal system and honored by society. And if that’s what the case for marriage equality portends, I think we should be proud of that inclusivity.

This time around, even more than in his first post-Prop 8 column, Douthat seems to be transparently arguing that heterosexuals are just better, or deserve to be treated with greater respect, than non-heterosexuals. The whole column is a barely-concealed bid to privilege heterosexual marriages simply on the basis of their being heterosexual.

Bigotry: not so cool either.

Leave a Reply to Molly (First the Egg) Cancel reply