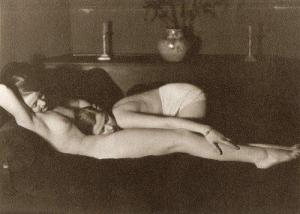 Over the past couple of weeks, I’ve been having a slow conversation-in-comments with Emily Nagoski over at ::sex nerd:: about human sexuality, sex research, and the classification of human sexual experience in the two general categories of female-bodied and male-bodied individuals.

The original post Emily wrote is about the problem of asserting sameness across sex/gender identity when it comes to human sexuality. From her position as a sexuality educator, specifically working with undergraduate women at Smith College, Nagoski highlights the ways in which a narrative of sameness works culturally to erase the experience of people who have don’t have the “sexual hardware” of the default human (a man)

Treating women’s sexuality as though it’s “the same” as men’s, in the social world and in science, results in women feeling broken and ashamed.

You can read the whole post over at Emily’s blog.

There are a lot of really awesome aspects to this argument, chief among them that asserting that different bodies respond differently to sexual stimulus is a great step away from the monoculture of “sexy” that our culture is currently saturated with. I also like the way it grounds physical sexual experience in the body, and encourages folks to learn about how their bodies work as a way of gaining a better understanding of their own sexuality.

It also pulls us away from the default understanding of sexual arousal as something that is primarily experienced by people with male bodies and hormonal profiles. It helps clear the ground for women to assert their sexuality without shame and without requiring them to mimic a type of sexuality they do not feel in order to be taken seriously as sexual subject.

From a personal perspective, I will say that one of the most valuable learning experiences in my early career as a sexual being was finding a second-hand copy of Shere Hite’s 1976 report of women’s sexuality in which she quotes long excerpts from questionnaires in which women describe in detail the diversity of their sexual desires, fantasies, physical arousal and relational experiences. Pages and pages and pages of women describing, in minute detail, how they masturbated, what sexual positions worked and didn’t work for them, what kind of touch they liked, whom they enjoyed making love with and how. Since the publication of Hite’s research, questions have been raised about the scientific rigor of her methodology — but to me the power of the book is not in its statistical validity, but in the individual voices that disseminate a type of information that is incredibly difficult, even in this era of the internet, to obtain: how actual people in the actual real world get off? what makes them horny? what fantasies do they carry in their innermost souls? what sensations push them over the edge? It seems so simple, banal almost, and yet there can be radical power in seeking the answer to those questions.

So what’s my problem with the emphasis on “difference”? It’s the fact that that human sexual difference is framed using a binary sex/gender system that simply doesn’t work for a lot of people. What about people with a “female” hormone profile who have penises? What about folks whose sexual arousal cycles seem to be spontaneous despite having a clit? And what about us cis-gendered women who, despite being accepted by the medical and social world as “female” and “feminine” just don’t see ourselves very well represented in the narratives of female sexuality that are out there? It feels to me like we’re rejecting one set of restrictive categories for another set of restrictive categories that just aren’t going to be very helpful to any of us in the long run.

We’re still going to end up feeling shamed, just for different reasons: maybe it’ll be okay not to be sexual in the same way as boys, but now we’ll feel the pressure to be sexy the same way as girls.

What gets lost is the question of how to be sexy like ourselves.

When I raised this issue in comments, Emily pointed out that scientifically-speaking, studying a species that reproduces sexually (as we do) means that it does make a certain amount of sense to examine the human population as one that is made up of two basic iterations (male and female). I get that talking scientific data is different from talking about cultural perceptions, but I also believe that the two interact in ways we often cannot even see. I also think that the language and results of scientific studies get misinterpreted by the media and the general public, and often translated into sound bites that end up supporting pre-existing notions of sex and gender difference: employed in making truth claims far beyond the scope of the original researchers’ work.

Emily also suggested that using the female/male categories as a launching-point to discuss sexual diversity is a useful educational tool.

That’s fair enough, actually, since people just vary (though men vary around one standard and women vary, more widely, around a different one). But my experience has been that people WANT – no, they’re fuckin’ DESPERATE – to be told what they are like. They want a category. They can’t cope without one. And since we’re a sexually reproducing species with males and females, the man/woman split is a natural-seeming division. It’s a comfortable couch for radical information.

So here’s my question to y’all. Do you want a category?

I’m curious. Because, see, I really, really don’t want to be told what I’m like. I have what’s probably an unhealthy aversion to being categorized. Do I like to run into stories that mirror my experience? Yeah, sure! It was an incredible experience to read Lisa Diamond’s book on sexual fluidity and finally hear the women she interviewed putting into words thoughts and feelings and physical experiences I had known intimately but did not have the language to articulate. But for me, it is enough to know that there are other like-minded or like-experienced people out there in the world. As soon as those beings start being grouped and generalizations are made about them, I develop a twitch.

I’m curious what responses other people have to this discussion of difference and categories, the comfort of categories and the danger that categorization will lead to marginalization or erasure. What have your experiences around descriptions of “female” and “male” sexuality been? Are there particular categories that resonate particularly strongly with you, that have been of use to you in better knowing and expressing your sexuality? Have other people tried to categorize you in ways you feel are just plain wrong? What cultural and/or scientific narratives were at work creating and enforcing those categorizations?

3 thoughts on “"people are DESPERATE to be told what they’re like": discuss”