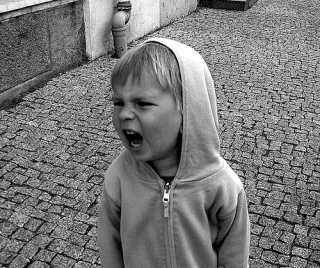 shout and scream by Mindaugas Danys
available at Flickr.com

So this past weekend I was enjoying some stimulating, thoughtful conversation over on Emily Nagoski’s blog about teaching women’s sexuality in higher education. A student in the semester-long class on the subject recently contacted Emily and suggested that the course material was “unintentionally heteronormative.” This provoked an interesting conversation on the comment thread about how to teach the biological aspects of human sexuality to students more comfortable in the world of sociocultural analysis — students who are (rightly) suspicious of simplistic truth claims from the world of hard science, but who are perhaps hastily dismissing an entire way of seeing the world that could be useful, as long as it remains one of many tools we have to increase our understanding.

I digress. If you’re interested in that conversation, you can head over to the original thread.

The thing is, a commenter jumped into the conversation and suggested this student — solely on evidence that they used the word “heteronormativity” was an “unhinged crank,” who “sees ‘heteronormativity in A/C plugs and sockets.” When Emily replied “I know with certainty they are not,” he begged to differ:

Anyone who would accuse the Emily Nagoski I know of ThoughtCrime – excuse me, “heteronormativity” – is nearing the straitjacket stage of gender politics.

The thing is — this guy obviously knows and wants to defend the thoughtfulness and openness of his friend. Both of these impulses are laudable. But I really, really wish we had a Godwin’s Law for references to ThoughtCrime, ThoughtPolice, 1984 and the derogatory use of “politically correct”  and the label of  “language police.” Attempt to invalidate someone’s argument by accusing them of being the thought police? You lose.

Like with Godwin’s Law,  the Feminist Librarian’s Law of Accusations in Place of Honest Reflection, allows that there are instances in which it is legitimate to speak out against genuine instances of attempted censorship or policing of other peoples’ life experience. I believe policing other peoples’ sexualities, identities, bodies, clothing choices, food choices, and yes, even language choices (when it comes to self-identification and description at least) is not okay. It’s their life, not yours. And unless their actions are causing you or other people demonstrable harm (for which you have to show not just claim causal effect), it’s none of your damn business. And if there were actually state-sanctioned censorship going on here, it’s legitimate to challenge it. (Although I’d suggest accusing the proponents of being the “thought police” might not be the best way to get your message concerning freedom of speech across.)

The thing is: No one in this scenario has tried to thought-police anyone.  A student in a class has raised concerns that a class on women’s sexuality is unintentionally perpetuating heteronormative culture. Heteronormativity is not a “thought crime”: it’s the accumulated effect of myriad cultural cues that suggest to us that the normal (and best) form of sexual identity and expression is one in which individuals’ gender matches their assigned sex, that gender expresses itself in only two mutually-exclusive ways (“male” and “female”) and that the most appropriate expression of human sexuality is through opposite-sex pairings.

Far from acting as the Thought Police (who, ahem, had the weight of the government behind them), the student in Emily’s class is raising a question from the margins. Our government supports heteronormativity not its opposite. One cannot literally act as the “thought police” unless one has the power of cultural, political, and/or legal authority behind them.

In my experience, the people who get most often accused of policing other peoples’ thoughts or words are people who are challenging the status quo.  People with no political authority or cultural weight behind them. While the people who respond to those challenges with accusations of language policing and characterizations of the first person’s challenge as a call for “political correctness” are defending the status quo.  They’re skeptical of the first person’s challenge, dismissive of their concerns, and all too ready (as this gentleman has) to label the challenger as a “crank” or “unhinged.”

This is not what Orwell was talking about, people. This is not censorship.  This is just, you know, people bringing up ideas that are outside your comfort zone.

And crying “thought police” just ’cause you’re a little uncomfortable is, shall we say, slightly over-egging the cake.

In my experience, the only goal of this tactic to get the challenger to shut the fuck up by telling them their question-asking is an hysterical over-reaction or a calculated power-play (probably both!). It signals to me that the accuser the doesn’t understand the crucial distinction between the exertion of power-over with the full weight of the Powers That Be behind it and the actions or speech of those who are challenging the Powers That Be the passive or active abuses the often come with those Powers.  It signals to me that the accuser does not care enough about the challenger as a person or about their ideas to give them due consideration, even if that person and their ideas make the accuser uncomfortable.  Reflexive defensiveness: Not. Cool.

Had similar experiences? Discovered ways of dealing with this sort of response effectively? Share in comments!

2 thoughts on “"you should call it the doppler effect. then people will shag you."”