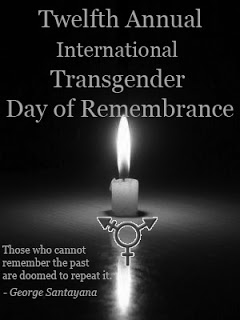 Today is the 12th Annual International Transgender Day of Remembrance, on which folks around the world take time to remember those who have died as a result of anti-transgender hatred or prejudice.

For most of this week, I didn’t think I had anything to offer for today — at least here on this blog. Being involved in feminist politics, and caring about intersectionality, I’ve become increasingly more aware of trans issues over the past decade or so.  Particularly in the last few years, I’ve come to know as personal friends a couple of people who self-identify as trans in one way or another.  And — in the way of such things — as the issue became more concrete (in the shape of people whom I crossed paths with in daily life) in my life, the once-abstract theoretical and political issues began to matter in a way they had not before. But I don’t have anything very profound or original to offer when it comes to memorializing the dead.

But I’ve been thinking a lot lately about gender, sex, and body policing, and I realized this week that that sort of community policing has a lot to do with anti-transgender hatred and prejudice, and the violence that hatred and prejudice can beget. So today, for Transgender Remembrance Day, I want to write about the importance of understanding about how personal opinions about other peoples’ bodies, when expressed in the world (and enforced through a variety of sociocultural mechanisms) aren’t just assholery, insecurity, or stupidity. Well, yeah, they are. They’re the opinions of stupid, insecure assholes. But in the past, much more than now, I think I believed it was in the power of people to just blow off stupid, ill-informed opinions. Sure, they hurt. Sure, they should not have been said. But you can’t control what other people think or say (still true) so … in the past I’ve focused on how to make those asshole opinions matter less to the individuals who were being bullied, harassed, ridiculed.

And all of that is as good as far as it goes.

But recently, I’ve been thinking way more about the collective power of body policing, and how combating it on an individual level just isn’t enough.  We need to connect the dots as much as possible between everyday, individual acts of body policing (passing judgment on whether someone picked out the right shirt, whether they should lose a few pounds, whether they “pass” as their chosen gender, whether X act is appropriate for their gender identity) and a culture that normalizes that pressure to conform to such an extent that folks who are prone to violence feel justified in exerting physical and emotional force in order to exact “correct” behavior from their victims.

We all make snap judgments about our fellow human beings. We’re socialized to do so: it’s part of the process of making sense of an otherwise untenably chaotic world. And I’m sure a certain amount of that categorization activity is necessary for us to function successfully as organisms in our environment.

But today, I’d like to point out that not all interpersonal judgments are necessary for our (physical and social) survival. Assessing whether someone’s likely to be an abuser? Probably a good skill to have. Passing judgment on whether or not someone made “good” or “bad” decisions about how to dress this morning? Whether their food or exercise choices are healthy? Questioning their self-identified gender or sexual orientation? Making them feel somehow dirty or wrong for being who they are in the world … when who they are is hurting exactly no one?

It’s just not cool. And it helps to perpetuate a culture in which we make it our business to police the gender and sexual identity of those around us, according to our own personal understanding of what boundaries should and shouldn’t be crossed. And that includes the personal understanding of those of us who think queerness is cool and the gender binary is passe AND those who think that any deviation from gender essentialist, heteronormative world is a fucking nightmare. And will resort to violence in order to protect themselves, and those around them, from it.

So next time you find yourself judging someone else’s identity or self-expression? Take a deep breath and think twice. I’d like to believe each time we do that, we make the world a little less violent than it otherwise would have been.

And maybe, collectively, we can stop so many people from dying just because someone stupid found their existence offensive.