feminism, politics, the body, the personal is political 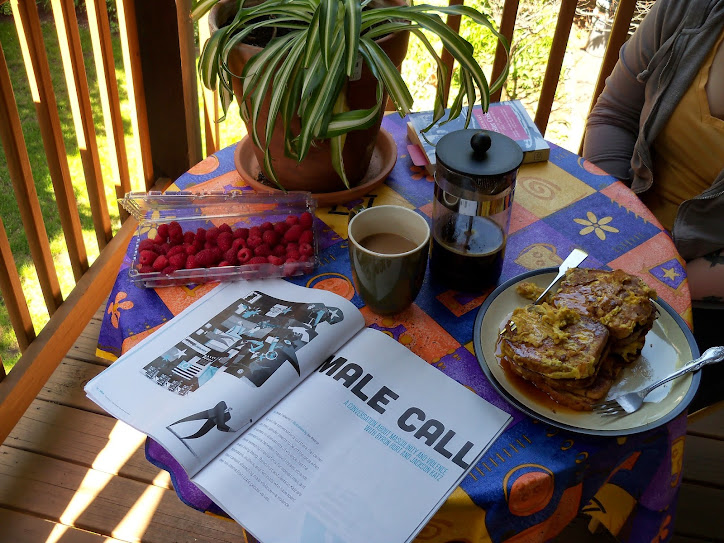 I don’t know how many calories were in this breakfast.
For me, that is a sign of better health than when I did.
As always, your mileage may vary.

I woke up this morning to a story on NPR about new FDA rules that will require restaurants with more than twenty locations to provide “calorie information” on their menus. Unsurprisingly, the story was factual-to-positive about the change; National Public Radio has a history of uncritically reproducing narratives about fatness, health, and the supposed “obesity epidemic” around which much moral panic has been generated in recent years. Public health workers gushed about the “terrific” new labeling and we were treated to clips of (young, female) customers giggling self-deprecatingly about their food choices and how calorie counts might encourage them to change their orders — always to something with fewer calories.

Given NPR’s glowing coverage, I feel the need to intervene in this self-congratulatory narrative and share a few thoughts on what effect providing calorie counts on menus has on me, as a consumer, and why I believe the practice is neutral at best and actively harmful at worst.

Why are we, as a society, obsessed with calories? A dietary calorie is a way of measuring energy, equal to the amount of energy required to raise the heat of one kilogram of water by one degree Celsius. Humans require fuel (measured in calories) to function; we consume energy in order to expend energy through physical movement, cognitive thought, to keep ourselves warm, to keep ourselves alive.

Fuel comes in many delicious forms, some more efficient than others; we can consume relatively “empty” fuel that is a poor source of energy, or energy-rich foods that supply us with nutrients we need to grow, repair, and function.

Therefore, to learn that the sandwich I ate for lunch on Monday contained 500 calories worth of fuel provides strikingly little information with which to guide my dietary selections. That sandwich could contain just what I need to help me function for the rest of the day; it could be superfluous energy that nevertheless served a social or emotional function; it could be fuel that actively worked against me in terms of an allergy or other physical reaction. The calorie count provides none of that information. Displayed by itself, alongside a series of menu options, the calorie units of each option is a set of supremely useless data.

But I would go further than that. I would argue that displaying calorie counts alongside menu options is actively harmful when considered in the context of our social dysfunction around food and our culture of fatphobia. Because in the public mind calories aren’t just a neutral way of measuring energy; calories are bad. Calories are shameful. And I’m betting that the 30% of consumers who, NPR reports, will actually read those calorie counts on the Starbucks menu are individuals who are already hyper-aware of their energy intake, who are already struggling with a disordered relationship with their bodies.

I’m betting this because, as I’ve described before, I used to be one of those people. One of those women. Between the ages of roughly sixteen and twenty-four I tracked my energy intake by counting calories. I still own cookbooks in which I once penciled in the calories for things like three cloves of garlic (24) and a tablespoon of lemon juice (10).

Yes, I learned a lot of nutritional information during this period, learned how to seek out a wide variety of foods to fuel my body, learned to pay attention to my body’s energy ups and downs.

But mostly, my sense of self of self worth rose and fell with the end-of-the-day tally of calories. (And to a lesser extent quantified exercise.) It didn’t matter what else I’d accomplished that day: acts of kindness toward others, ideas articulated in writing, conversations, explorations, creations.

It all came down to the numbers:

To this day, seeing calorie counts listed beside my fuel options prompts stress reactions, visceral reminders of a time when what counted about my personhood was how much fuel I did (or didn’t) consume.

A time when less fuel equaled more worth.

So forgive me, NPR, if I don’t view these new FDA regulations as an unalloyed good. As an act of self care, I’ll likely be avoiding — as much as possible — those restaurants affected by the new rules. Because rather than a tool for making informed fueling decisions, I see calorie counts as mostly promoting a simplistic less-is-better, fatphobic and deeply disordered, alienated relationship to our bodies and the way we care for them.