cross-posted from …fly over me, evil angel…

Hanna’s recruited me to help her come up with the next 75 quotes for parts 2, 3, and 4 . . . problem is I have a really, really hard time remembering snippets of things. my brain doesn’t think in quotations very easily. so my contributions end up sounding a lot like, “oh! you need to include something from that scene with Jack and the Doctor and the banana” or “that bit from ‘Merlin’ where Arthur was harassing Merlin about the bedclothes.” Me <– Not very helpful.

Nonetheless, she gives me entirely undeserved credit below and has been generous enough to share html so I can cross-post it here. Enjoy the glorious depths of her encyclopedic memory and look here for further installments throughout the next four weeks.

okay, so in the spirit of “don’t complain about something if you’re not prepared to do it better,” i noticed over the past couple of weeks two lists — one from wired and one from a blog i know not of called ink-stained amazon which i have to say is beautiful to look at it — that both purport to be ‘essential lists’ of ‘geek culture’ quotes.

ahem.
okay, so the wired list starts off with monty python and the holy grail and the amazon list includes the sarah jane adventures — but i’m still not wildly impressed with either one.
i figured i could do better.
then i thought about it and realised that, on my own, i didn’t have the time to do better so i roped in my ever-patient girlfriend to help me do better. 🙂
first off, a couple of notes:
1. this is for fun. if you’re not amused, go read something else. i won’t be offended, promise. that being said, suggestions and additions (politely phrased!) are welcome in the comments. but keep in mind this is installation 1 of 4! not everything will fit in here.
2. these are probably mostly going to be dredged out of my memory, anna’s memory, imdb, or official show/movie sites. inaccuracy is, therefore, almost inevitable. not to mention repetition of shows or characters. if this annoys you– well, make your own list. 🙂
3. i’m not aiming for some kind of “worst to best” or “best to worst” list. they’re here because the two people making the list think they’re fun or because one of us was able to strong-arm the other into including them. brief context is provided where anna or i thought it was necessary. i also tried to find links for character images that were from the episode/scene/moment where the quoted line was spoken. this isn’t always possible but i’m fairly pleased with myself for getting as close as i did! fair warning: links may contain spoilers, particularly links to doctor who or torchwood episodes.
5. i am aiming for 4 posts of 25 quotes each over the next 4 weeks. tune in each friday/saturday for your new installment!
okay, and that being said…
1. Tim Latimer [talking about the Doctor]: “He’s like fire and ice and rage. He’s like the night and the storm in the heart of the sun. He’s ancient and forever. He burns at the centre of time and can see the turn of the universe…and… he’s wonderful.” Doctor Who, “The Family of Blood.” 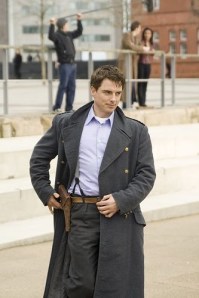 2. Captain Jack Harkness: “Torchwood: outside the government, beyond the police. Tracking down alien life on Earth, arming the human race against the future. The twenty-first century is when everything changes. And you gotta be ready.” Torchwood, Season 1 opener on all episodes.
3. Brother Justin Crowe [talking about his upcoming radio broadcast]: “In a single coast-to-coast broadcast, I will speak to more souls than our Lord did in his entire lifetime. It’s going to be breathtaking.” Carnivale, “Ingram, TX.”
4. Dominic Toretto: “I retract my previous statement.” The Fast and the Furious.
5. Murtagh [in reference to a stone wall he and Eragon have run up against in their attempt to join the rebels]: “Tell me your vision looked something like this.” Eragon.
6. The Guide: “Don’t Panic.” The Hitchhiker’s Guide to the Galaxy.
7. The Doctor: “Don’t blink.” Doctor Who, “Blink.” 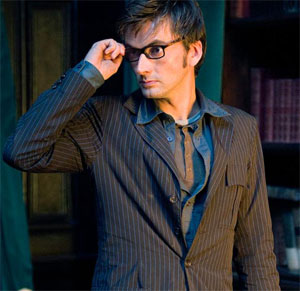 8. M [to James Bond as he almost says her real name]: “Finish that sentence and I’ll have you killed.” Casino Royale.
9. Captain Jack Sparrow [in reference to almost anything]: “Not good — not good!” Pirates of the Caribbean: Curse of the Black Pearl.
10. Alice [before killing the monster that used to be her work partner and “husband”]: “I’m missing you already.” Resident Evil.
11. Riddick: “If you can’t keep up, don’t step up. You’ll only die.” Chronicles of Riddick.
12. “I’m going to curl up in his sock drawer and sleep for days.” MST3K riff in MST3K: The Movie: This Island Earth. 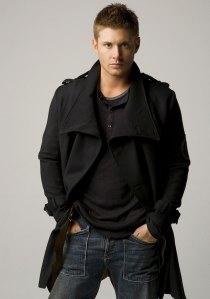 13. Dean Winchester: “Well, that’s healthy.” Supernatural, Pilot.
14. C-3PO: “Shutting up, sir.” Star Wars: A New Hope.
15. Dr. Frank N. Furter: “What ever happened to Fay Wray? That delicate satin-draped frame…how it clung to her thigh as I started to cry… ’cause I wanted to be dressed just the same…” The Rocky Horror Picture Show.
16. Jim [wandering in an empty London]: “Hello! Hello — hello! Hello!” 28 Days Later.
17. Temperance Brennan: “I don’t know what that means.” Bones, multiple episodes.
18. Plankton: “Well, goodbye, everyone. I’ll remember you all in therapy!” Spongebob Squarepants, “The Algae is Always Greener.”
19. Wesley Gibson [talking to Sloan who may, or may not, be trying to induct him into a secret brotherhood of assassins]: “So do you make sweaters or do you kill people?” Wanted.

20. Toshiko Sato: “Because you’re breaking my heart.” Torchwood, “Exit Wounds.”
21. The Doctor: “Well, progress is a very flexible word. It can mean just about anything you want it to mean.” Doctor Who, “The Power of Kroll.”
22. Michael Corvin: “Are you fucking kidding me!” Underworld.
23. Mme. de Pompadour [talking to/about the Doctor]: “Such a lonely little boy. Lonely then and lonelier now.” Doctor Who, “The Girl in the Fireplace.”
24. Obi-Wan Kenobi, Anakin Skywalker: “We’re smarter than this!” “Apparently not.” Star Wars: Revenge of the Sith.
25. Marvin the Paranoid Android [about life in general…]: “I have this terrible pain in all the diodes down my left side…” The Hitchhiker’s Guide to the Galaxy.