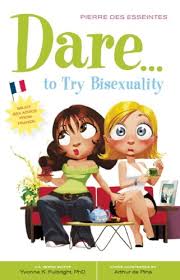 You might ask why I requested a review copy of this book (and it would be a fair question). I had misgivings about it from the title alone: “try” a sexual orientation? Um … come again?  I mean, I’m definitely a believer in sexual fluidity, but that doesn’t imply that “bisexuality” is something one can take on and take off at whim, like a new sweater or experimental color of lipstick. Rather, it suggests that our sexual desires and affectional attractions are unpredictable, and that we should cultivate an openness to the possibility of change over time.  The title of this book suggested, on its face, a much more … gung ho! approach? And I was wary.

What I realized, once I’d cracked the spine, was that the title is, in part, suffering from cross-cultural meanings becoming lost in translation.  Whereas an American audience would read “bisexual” as an orientation, this French manual is clearly situating it as a lifestyle. What, in American terms, is probably more aptly described as being “polyamorous,” seeking out open or swinging relationships, or perhaps just slutting it up with partners of multiple sexes. Well, with both male and female partners. Maybe trans folks as well, but the text is unclear about that.

Actually, Des Esseintes is all over the frigging map when it comes to what, exactly, he means by “bisexuality.” Sometimes he seems to approach it as an orientation, sometimes he actually seems to be talking more about transsexuality (chapter one is titled “Bi: Between Two Sexualities or Both at Once?” and discusses the myth of Hermaphrodite). Most of the book treats bisexual behavior (i.e. individuals who seek out both same- and other-sex sexual partners) as something fun and optional. Something any person might try out as a possible approach to sexual relationships that could work for them. This is both highly amusing and highly irritating — throughout my reading I was distracted by trying to decide whether the man was being delibrately over-inclusive in his terms and examples, or whether this was just a case of sloppy thinking and/or sloppy translation. I still haven’t decided.

Overall, the book invokes pretty much every stereotype about bisexuality as well as relying heavily on false notions of gender difference. Take, for example, this passage in the chapter on women’s bisexual behavior:

At some point in their lives, some girls, whether or not they live with a man, need a kind of loving they can’t get from guys. All the women who opined to us about the differences between men and women in bed highlighted the tenderness and gentleness that women alone can deliver (53).

Note how this passage implies that people who feel bisexual desires “need” to act on those desires, because they won’t be totally satisfied with the sex that they’re going to get from a single partner (representing only one of the sexes they are attracted to).  Plus, “women alone,” apparently, are capable of delivering tenderness and gentleness in bed … an assertion that I’m pretty sure would astound a great number of women in relationships with men.  Des Esseintes goes on to suggest that lesbian lovers are all, by virtue of gender, noncompetitive cuddlefests … an assertion I think would come as a surprise to many lesbians who enjoy a little topping/bottoming action in the bedroom in addition to candles, massage oil, and snuggling.

The most positive thing I can say about this book, really, is that it is written in the spirit of informational neutrality. For all its stereotypical depictions of sexuality and sexual relationships, the book conveys basically responsible advice about sexual health (see “A note on taking precautions before blowing a stranger,” p. 33) and is blithely encouraging to its readers about giving “bisexuality” a go, on the chance it floats your boat. Chapter six (“Bi in Bed: Choreography”) offers step-by-step instructions — with illustrations! — for various three- and four-person positions for getting off. “You too!” the book seems to shout, “can recruit your friends and lovers to enjoy the pleasures of The Magic Square!”

Go forth and be amused.