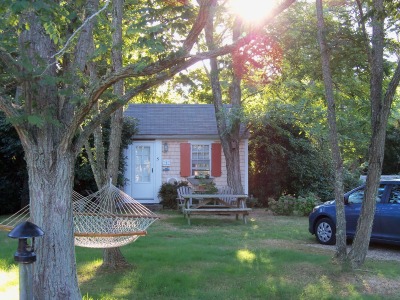 For our honeymoon on the Cape, we chose to stay in a cottage colony just north of Orleans called Cranberry Cottages; we were in a little studio cottage called “The Honeymooner,” though we didn’t realize that until after we’d arrived!

At the “elbow” of the Cape, the Orleans-Eastham area is a great spot — if you have a car — to explore up and down the Cape. With a week to poke around, we picked a different destination almost every day and took in what there was to see (and taste!).

On our first morning we walked out from our cabin to the rail trail that took us directly into Orleans on foot, where we breakfasted at The Hole in One donut shop and restaurant. Breakfast was so tasty that we decided to take our donuts to go, and have them as a mid-afternoon snack! 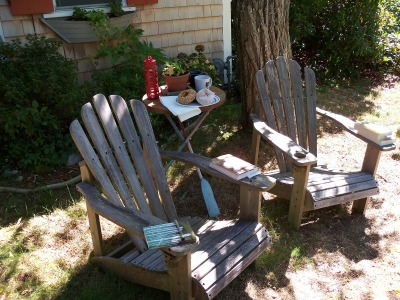 What’s a honeymoon / vacation for if not for sitting in Adirondack chairs drinking coffee, eating donuts, and catching up on one’s leisure reading? 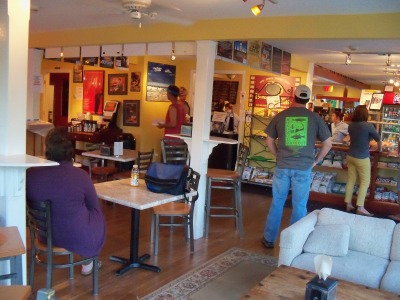 For dinner, we found a great restaurant called the Box Office Cafe that offered a wide variety of unique movie-themed pizza. We got the Beetle Juice pizza that featured (vegan) chicken, blueberries, and BBQ sauce. Hanna was skeptical, but I persuaded her and we enjoyed it so much we bought it twice more before the week was out!

Next up … our two days in Falmouth (one outdoorsy, one pamperingly girly).

*In the event that folks have noticed, I’m the only person depicted in these photographs not because Hanna decided not to come along on our honeymoon but because she doesn’t like to share pictures of herself with the world, online or off.