When I moved to Boston from western Michigan in 2007, I was baffled and amused by the seeming hysteria that overcame city residents at the advent of snow season. Schools and businesses closed, people seemingly forgot how to drive, “snow emergencies” were declared … for real? I thought. Sheesh, these city dwellers. Jumping at shadows. Or, you know, snowflakes.

The thing I didn’t really grasp, at that point, and which I’m only really starting to understand eight years later, is that urban density of the kind that Boston and a few other major metropolitan areas in the U.S. feature, fundamentally alter the experience of heavy snowfall. 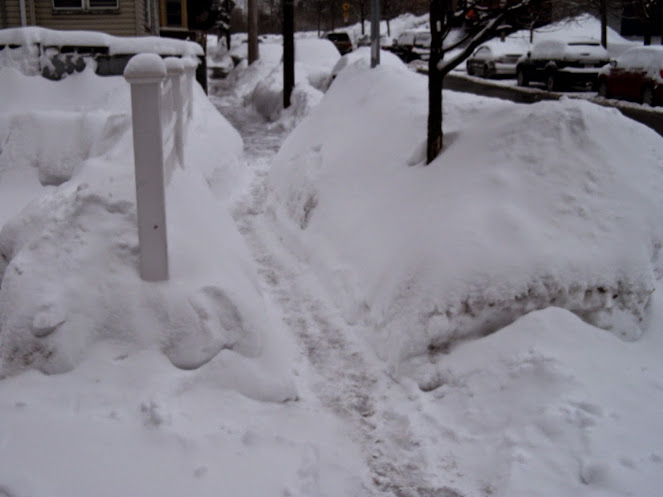 Walkable urban density is one of the city’s great features — it’s resource-efficient and convenient for those of us who live within it; Hanna and I live within three miles of virtually any location we need to go on a regular basis, and have been able to live without a car since moving to Boston precisely because everything is close together and connected by sidewalks, bike paths, and multiple public transit options. High-density housing (multiple family homes; small plots; apartment buildings) often mean that green space is socialized — neighborhood parks are a great feature of Boston’s landscape (and one we will definitely fight to keep the Olympics from decimating). 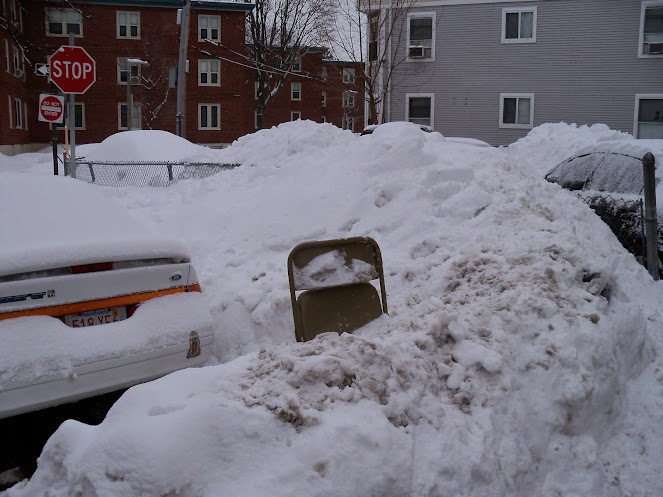 Yet this same density of human habitation does present some problems for winter snow removal unique to our particular landscape: Where the fuck do you put the snow? Unlike in the neighborhood where I grew up, where houses were set back from the sidewalks, and sidewalks set back from broad streets, when snow needs to be removed in Boston, we’re often talking about moving it from a location used for one purpose onto a location used for another purpose. We don’t have broad front yards. We don’t have space between sidewalks and curb. Our streets are often narrow, barely two cars wide, with ungenerous parking on either side — street parking made necessary by the lack of off-street parking on many properties. 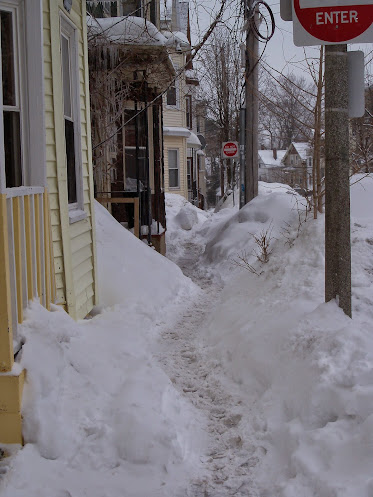 When the weather gods see fit to dump upwards of six feet of snow on our neighborhoods — a number we’re facing down these next two days as the third round of storms in as many weeks descends — humans with shovels, and even snow blowers, can only do so much. We can only carry the snow so far, pile it so high. Which is why we leave our homes to sidewalks that look more like narrow deer trails, if they are visible at all, and streets lined with parked cars buried under successive layers of snow and ice.

Boston isn’t built to handle 5 or 6 feet of snow in just over two weeks, yet there is the potential by Tuesday morning that is exactly what will have fallen since this pattern began with the blizzard. If this is the case, snow budgets will be the least of many cities and towns issues. Travel by car will become painfully slow through Boston (worse than it is already) and nearly as slow in other areas that exceed a foot of new snow by Tuesday morning. It won’t matter that roads are plowed, because they will become even narrower and slower to navigate. Already we must all inch into various intersections we used to be able to just stop and proceed through.

This is a level of weather that atomized human beings, single households, and even single neighborhoods are ill-equipped to handle. The City of Boston has had to resort to trucking the snow plowed from the street to snow farms (read: empty municipal lots) while the Massachusetts Bay Transit Authority (MBTA) — crippled from years of under-funding — fails to provide adequate service to keep workers in the metro area traveling to and from their jobs. Some of us have flexible, understanding employers — many of those most dependent on public transit do not.

Last week Yoni Appelbaum, writing at The Atlantic, explored the relationship of blizzards to city infrastructure and citizen expectations. He observed:

The modern American mayor was born in a blizzard. In 1888, the Great White Hurricane bore down on the metropolises of the eastern seaboard, destroying infrastructure and paralyzing commerce. The devastation it left behind convinced voters that America’s burgeoning cities could function only if local governments assumed a larger, more proactive role.

…The modern metropolis seemed buffered against the perils of extreme weather. After a devastating blizzard early in the winter of 1888 struck the Great Plains, Frank Leslie’s Illustrated Newspaper sniffed about, “the folly of settling in a wild country, especially on bleak plains, however cheap the land may be, without assured means of providing decent shelter, fuel and provisions for more than the immediate future.” Dense, urban neighborhoods might be more expensive, but supplies and aid were never distant.

When the storm struck, though, the technological conveniences and amenities of urban life were suddenly exposed as vulnerabilities. In eastern cities, almost all of the electric lights and most of the gas lamps went dark. Streetcars ground to a halt. Passengers hurtling from one city to the next were stranded on the rails, as trains stalled out in enormous snowdrifts. Poles snapped under the weight of the snow, weaving spiders’ webs of crackling wires across the streets. With regular deliveries suspended, housewives husbanded their coal, mothers ran short of milk, and housebound residents scraped their larders bare. Funeral homes could not take bodies out of the city for burial, and so stacked them in barns and sheds.

What Appelbaum’s article — and our own experience in Boston these past three weeks — powerfully illustrates is that the modern city is by necessity a socialized entity. We need to fund our infrastructure robustly so that the organism that is the city — the very organism within which so many of capitalism’s cherished market forces thrive — so that all of us can benefit. Not to mention being able to walk to our favorite neighborhood coffee shops. 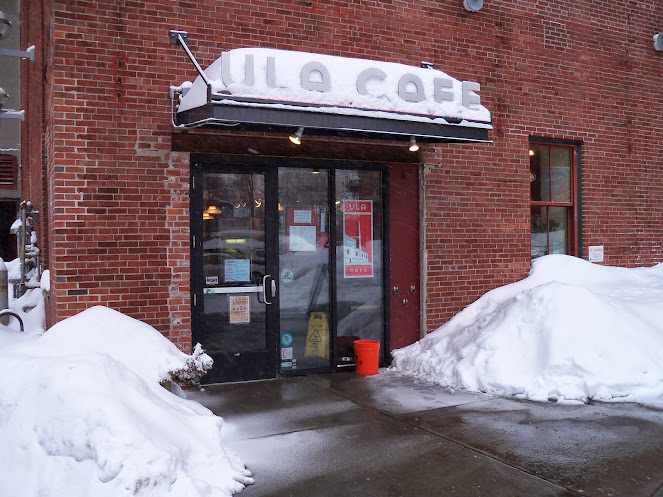 Local Janssen McCormick made this point, somewhat tongue-in-cheek, following last week’s snowstorm by setting up a GoFundMe effort with a goal of $300 million dollars — the amount needed to foot the bill for the MBTA’s much needed upgrades. Initially a joke, he updated the campaign yesterday to commit the $575 already pledged (and any subsequent donations) to the cause:

Genuinely surprised by the response this GoFundMe has attracted. All the coverage and many of the emails this has received have asked where this money is going to end up. And I can say, dead serious, if we hit our goal of $30 billion (or $300 million due to the limits of GoFundMe) all of this money will go to purchasing new rolling stock for the MBTA.

Per this article ( http://tinyurl.com/lr3ogkb) BART plans on purchasing between 775 and 1000 new cars from Canadian manufacturer Bombardier at a cost of $3,225,806 per car. Adding a job creation angle to this is the fact that each of those cars will be manufactured in Bombardier’s Platsburgh, NY plant. So if we hit our goal that means 93 new cars, made by American workers, in service for $300 million.

If we don’t hit the goal, all proceeds will be donated to an organization working on the issues this GoFundMe makes light of.

While I wish this fundraising effort all the best, it’s genuinely sad that an individual’s crowdsourced campaign is attempting to fill the gap where our state and local government apparatus has failed — in part because we, as citizens, have demanded it fail. I hope these extreme weather events can go some way toward reminding the more libertarian among us what “big government” is actually good for — and demonstrating that there are limits beyond which government “efficiency” and cost-cutting simply mean a poor return for us all.

1 thought on “snow on minden st. [thoughts on urban winter]”