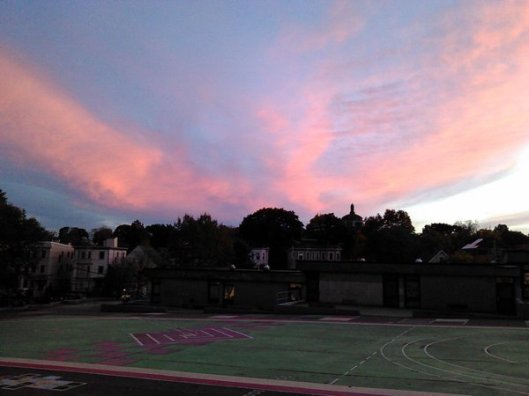 October is one of my favorite months, generally speaking, in terms of both weather and rhythm of life. We’re passed the dog days of summer and over the panic spiral that is the first month of school. I’m mostly spared the academic stress these days, due to no longer being in school, but Boston being one gargantuan college town it still seeps into the cracks on the pavement affecting everyone. We’re all, more or less, on the academic timetable in these parts.

This year’s October careered by at inadvisable speed. Hanna and I were both busy at work with that busy that seems to move various deadlines closer yet never quite manages to shorten the list of things to do. I got some things done, had to postpone others.

Hanna and I both at that point in our working lives where we’re figuring out how to “lean out” perhaps more than we lean in — carving out time to enjoy each other and our life together while still taking pride in our work and bringing home enough income to put food on the table, keep a roof over our heads, and have enough “pin money” left over to enjoy our morning coffee and maybe take a trip every so often.

The professional and the personal sometimes fortuitously overlap, as when Hanna and I can convince (not that it takes much convincing) our friend Brandy Schillace to accept a joint review of a book or a film for Fiction Reboot | The Daily Dose. This month’s contribution was a conversation on Crimson Peak which we thoroughly enjoyed on opening weekend:

Hanna: […T]hat’s why I keep coming back to Thomas and Lucille being children. They’re not functioning adults. You can see it in Thomas showing Edith around the house when they first arrive. She’s like, “Uh, hon…there are leaves. Coming through the roof. Right now.” and he’s all, “Yeah, it’s a bit rough but it’s always like that!” Like a kid showing off a playhouse. It’s the sort of environment children would adapt to and find normal but an adult would not and neither Thomas nor Lucille have ever really become adult. […]

Anna: You make an excellent point about the Sharpe siblings being essentially non-adults. Not exactly “childlike” — they’re not the innocent children of romantic literature — but non-functional. They gesture toward the darker side of faerie in which illusion is the plane of existence within which the fae thrive. Not just spinning it to fool humans but such that they cannot see and are uninterested in the rot that exists betwixt and between the illusion?

Early in October I also reviewed Jane Ward’s Not Gay, out this summer, which thoroughly rocked my world. On my bedside table I also have review copies of Sexology in Translation edited by Heike Bauer, Riotous Flesh by April R. Haynes, and Peggy Orenstein’s Girls and Sex about which I had a lovely pre-review exchange with the author on Twitter. Whenever a review book arrives in the mail I feel like Bill Nighy’s character in Love Actually:

“Don’t by books children … become a librarian and they’ll give ’em to you for free!”

Books are not just for professional reviewing, of course, and while feeling bereft after finishing the latest Toby Daye novel (A Red-Rose Chain) I stumbled upon Carry On by Rainbow Rowell. I say “stumbled upon” because although I’ve been encouraged for years to try her work it has never been the right moment — and then Columbus Day weekend arrived and someone online sold this book to me as the queer, inclusive Harry Potter-esque fantasy narrative we’ve all been waiting for and I was like, “sold!” and was forced to buy the e-book version when our local Indie bookshop had no hardbacks on hand (I went back later and bought the physical object because serious booklust). And it did not disappoint. As I observed on Twitter while devouring the story, “Rainbow Rowell has taken all that is glorious about queer fanfic and distilled it into a printed book I can cuddle in my hands.”

I also had the pleasure, this past month, of reading two full-length drafts of novels — one romance, one fantasy — for friends of mine, which was a treat. I’m dreadful as a copy editor (poor attention to detail) but very much enjoy the process of chewing over stories and characters with fellow writers. I think it comes from the same impulse for dialogue out of which my fanfiction springs — thinking about what motivates characters and how the events of their narratives shape them. How I might care for or interact with them as people in the world.

I also had the pleasure of hearing Rachel Hills speak on a panel at Boston Book Fest about The Sex Myth (reviewed here back in August) and also Irin Carmon and Shana Knizhnik on their just-released Notorious R.B.G.: The Life and Times of Ruth Bader Ginsburg.

My mid-October weekends were wrapped in external obligations — two service days at The History Project, social gatherings over drinks and stitching — but I have managed to fit in some writing of my own, and hope to have a new piece of Haven fic posted to the Let Your Indulgence series within the week.

Hanna has been working on a most wonderful Foyle’s War fic of which I can’t get enough, and this Friday she and I were bandying about a joint story arc set in London after the war. Let’s just say everything is gay and nothing hurts. Stay tuned. It just might happen.

And now it’s November 1 and we’re looking toward the holiday season. The second week of November we’re headed north for an early holiday gathering in Maine, before the snow begins to fall. And then begins the scramble to wrap up one’s annual goals before the end of December, and the pleasure of anticipating some periods of doing-not-much-at-all over the holidays themselves.

Our household is keeping every finger and toe crossed that this holiday season involves no early-morning trips to the emergency room or structural meltdowns a la December 26-January 16 of last winter. Hopefully that’s not too much to ask.

Now back to revising my Haven fic.