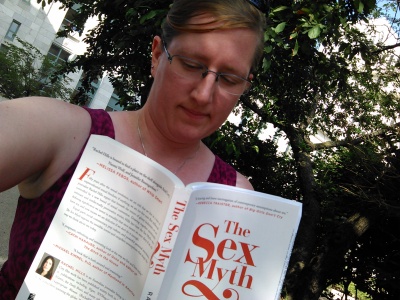 Rachel Hills’ The Sex Myth: The Gap Between Our Fantasies and Reality (Simon & Schuster, 2015) is released today in the U.S. I’ve had the privilege of watching this book grow into being on the Internet over the past half-dozen years and — full disclosure — in 2012 I became one of the over 200 interviewees whose stories form the backbone of Hills narrative. It was with some measure of bystander pride, therefore, that I cracked open the spine of my reviewers’ copy last month and sat down to read the final iteration of Hills’ research on the sexual cultures of our English-speaking world (primarily Australia, Britain, and the U.S.).

The Sex Myth is a book-length work of well-researched journalism, drawing from various disciplines — history, philosophy, psychology, sexology, sociology — as well as personal narratives gleaned from those one-to-one interviews to explicate what Hills refers to as The Sex Myth. The Sex Myth is the dual narrative of sexual performance and sexual purity that exerts normative pressure on us all to put an inordinate amount of energy and effort into our sexual selves while simultaneously making being sexual appear natural, effortless, and flawless.  We are encouraged to imagine sex is spontaneous and authentic, an ultimate expression of liberation, at the same time that we scrutinize and judgmentally regulate human sexual behavior at every turn. We’re encouraged to be sexually “free” and “liberated” on the one hand while being handed a very specific playbook full of stage directions on the other.

Sexual morality, Hills argues, has also become the lens through which we understand our worth as human beings, even as we remain profoundly uncomfortable really delving into the messiness that is human sexuality. To “fail” at sex, therefore, is to fail at being human — even as the culturally-proclaimed markers of sexual success are ever-changing, contradictory, and often at odds with what the evidence shows will make for a pleasurable, healthy sex life. Most of these points will be familiar to any keen observer-participant in Anglo-American sexual culture; historians of sexuality could point out that this precarious double standard (sex as a natural good and a dangerous social threat) is hardly an invention of the post-Sixties generations. Yet Hills offers up brisk, chatty review of these themes grounded in the lived lives of Millennials and a few of us old fogies from Generation Oregon Trail.

Despite the fact that I contributed in some small way to this project, I had the disconcerting experience of not connecting very strongly with The Sex Myth as either a member of its subject population or its target audience. Although I am in agreement with Hills in terms of an overall diagnosis of cultural norms, rather than resonating with the personal stories related in the book the experience reminded me of my adolescent experience reading sociological studies of teen culture (because, yes, I was the sort of teenager who preferred reading sociological studies of teen culture to spending more time than strictly necessary with groups of my peers). I enjoyed the ethnographic data … but didn’t much recognize myself in the mirror The Sex Myth sought to hold up to my sociosexual experience.

Since I finished the book, I’ve been puzzling over why this is. Part of it, no doubt, has to do with the fact that I’m three years older, more or less, than the me who contributed to this book. When I met with Rachel in the spring of 2012 Hanna and I were just beginning to plan our wedding and the tumult of my entry into the world of relational sexuality, public sexual identity, and the social navigation those both require, was still relatively fresh in my mind. I don’t actually remember much of our conversation but I imagine I could have spoken at great length about the stress of being expected to know my sexual orientation, the confusion of being a late-bloomer, my retrospective frustration with heteronormativity and sex negativity. My response to The Sex Myth for most of my teens and twenties was to simply opt out — to refuse sexuality on the dominant culture’s terms — and therefore, in my late twenties, I struggled to find common language in which to express my desires. Rejecting the dominant cultural ideologies only get you so far when you also want to connect with people and you don’t know the right passwords into the subculture or counterculture that suits you best.

Three years later I’m, well, three years older. I’m three years deeper into my thirties and nearly three years married. I’m six years, instead of three, beyond the point of needing to articulate my sexual identity in a way that will help me to find my people (or, in the case of monogamous me, my singular person). While the personal is never apolitical, being in a stable relationship does mean that you and the person — or people — within that relationship have the chance to develop you-specific expectations and understandings. You don’t need to lean so heavily on broad cultural narratives for initial mutual comprehension because, over time and with intentional effort, you find the narratives that work for you.

So some of my non-identification with The Sex Myth‘s narrators comes from being at a specific point in both my adult life and in a specific type of relationship. It’s also true that I brought a heavy dose of this iconoclasm to our relationship in the first place. For whatever reason, as a young adult, I approached the cluster of narratives that form The Sex Myth with a jaundiced eye, picking my way gingerly around them until I found the squeaky board in the back pantry through which I could effect my escape. Most of Hills’ interviewees seem to have felt, at one point or another, much more subject to the Myth than I did — or at least more entangled in its narrative logics than I was ever forced to be.

Here’s the thing. The expectations and opinions of everyone and his third cousin about what you should or shouldn’t be doing to pleasure yourself and your partner(s) seem so laughably irrelevant in the context of relational intimacy — whether that intimacy lasts a few hours or a lifetime. And as I grow older I find it increasingly difficult to understand why The Sex Myth continues to have cultural currency. It functions to make the sexual experiences of pretty much everyone Hills interviewed worse rather than better. Maybe I’m just a romance-killing utilitarian, but if the stories we’re telling our collective selves aren’t serving to increase the sum total of pleasure and joy in our lives why the fuck do we keep telling them? I just have a really hard time understanding why people let themselves be pressured into conforming to a sexual culture that appears to be making them miserable.

Which brings me full circle to my ultimate agreement with Hills, despite the fact that her interviewees narratives don’t much resonate with me on a personal level. Both Hills and I agree that The Sex Myth as a normative cultural narrative is toxic and that our collective cultural response should be something like this:

Cultural narratives are only as strong as we allow them to be. We must — individually and together — accept and replicate them, meme-style, in order for them to develop and maintain their social relevancy. If The Sex Myth helps dislodge The Sex Myth from its paramount place in our shared discourse around sex and relational sexual intimacy, then I’m grateful for its existence in the world even if it doesn’t particularly speak to me. My hope is that it will speak to many people who aren’t me, and encourage them to speak up and reject the stories that aren’t working in their own sexual lives — and start telling some that will work better instead.