I’ve cut back on the amount of commenting I do on blog threads lately, mostly because I just don’t have the time to commit to serious reading and response and follow-up. But earlier this week I clicked on over to the interesting (read: heated) discussion going down at the blog Yes Means Yes on a thread written by Thomas about “Public School, Homeschool, Parents and Gender Roles.” The whole thread is a fun/irritating read (if you dislike generalizations, be warned); after reading through it I felt compelled to offer the following personal perspective (here slightly edited for clarity).

Movie, Reviewed asked: “I’ve heard accounts of homeschool kids having problems relating to their peers precisely because they didn’t have the social experience of school and were therefore isolated from the mainstream of American youth culture.

I’d be interested to hear from folks who were homeschooled about their experiences with that.” 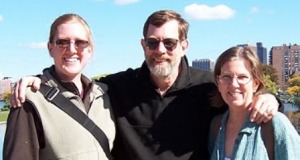 I was home educated from birth on (and, as an older child, chose to continue learning at home until college) and while I can’t begin to tackle all of the stereotypes and generalizations Movie, Reviewed is making about a very heterogeneous subculture, I can speak about my own personal experience making social connections beyond my family.

I have always been a very intense one-to-one relationship sort of person. From a very young age I preferred time spent with one or two other people to large groups of folks, which I found overwhelming. I don’t believe this is because of my home education, but rather a personality thing that my home education allowed me to build on as a strength, rather than getting me stereotyped as “antisocial.” Throughout my life, I have been able to choose and invest in friendships with a diverse bunch of folks irregardless of age; I have always been confused by the emphasis in our society on fitting in with one’s age-peers; I prefer spending time with people at all different stages of life since in my experience it leads to much more diverse conversations and opportunities to see things from new perspectives.

My girlfriend and I have conversations about the relationship of homeschooled kids to mainstream youth culture. She learned at home until high school and then went to a public school in 9th grade. Somehow, we still manage to communicate successfully and have a meaningful relationship. True, she has certain cultural references from her youth that I don’t have (just as I have cultural references from mine she doesn’t). Much like if I had grown up in a different country, I have a different body of knowledge than she does that, in the end, just means we have a more diversified pool of experience to draw upon. I don’t feel that it means I have somehow lost out in some vital, debilitating way to “mainstream” adolescent experience.

The first is that unless you choose as a parent to remove your children from the society of others altogether and isolate them in a remote geographic location with no internet or media connections, there is little danger of them not imbibing some measure of dominant cultural understanding. By definition, dominant cultures demand some level of understanding even from those who are forced (or choose) to live on their margins. So I feel that the panic about home-educated kids not experiencing mainstream culture is at least overblown if not totally disconnected from the reality of a highly inter-connected world.

The second point I would make is to question the assumption that “relating” in the sense of “agreeing with” or “having the same experiences as” one’s peers is a worthy goal to have for one’s children. Many home educators choose to allow their kids to learn outside of the institution of school precisely because they are wary of the values that are imbued in institutional education, or wary of the lessons their children might learn about power and worth from the hidden curriculum of school spaces (for example from bullies whose manipulative behavior goes unseen and unchecked). Home education is often consciously, unabashedly counter-culture in its aims (although, as I suggested at the beginning of my comment, the direction of that counter-culture impulse is far from uniform). So to reiterate: Movie, Reviewed’s concern over home-educated children not meshing well with their schooled peers seems to assume that it is in the best interest of the home-educated kids to alter their behavior in the directed of the schooled kids; I would turn the question back around and ask why the change in behavior shouldn’t come from the other direction.

Stepping back even further from Movie, Reviewed’s framework, I would suggest that “relating” to others in the world is less about uniform experience and behavior than it is about the process of developing skills for encountering others different from ourselves. Skills such as listening, curiosity, empathy, patience, self-awareness, self-confidence, and humility. Taken together, these can help us learn from those whose background and life experiences are vastly different from our own. In that alternate frame of reference, the particular site in which those skills are learned (at home, in a school) are largely irrelevant: home-based education has potential to equip young people to venture out into the world curious about the diversity they will find there.

In my own experience, not being confined to a classroom for X number of hours a day socializing mostly with people of my same age actually broadened, rather than narrowed, the realm of my social relations. In contrast to my schooled friends, I spent much more time interacting with people who were younger and older than I, and who spent their days doing different things than I did. I don’t feel impoverished because of that, nor do I feel unequipped to navigate the realm of the “grown-up” world: it is the world in which I have lived my whole life.

I realize home education per se will not magically make this sort of openness to experience and social interaction happen . . . but I also think it is dangerous to assume that schools, public or private, will either. Neither are a panacea for addressing the inequalities of our society or the impoverishing social isolation that many people feel. I think the answers to those issues need to happen on a deep cultural level rather than putting our faith in one particular institutional framework (public schooling, after all, is a relatively recent invention!).

2 thoughts on “in which I write comments on others’ blogs”