So I was poking around on the backlog of feeds today looking for something to write a quick post about and realized that in the last week, there have been two stories related to the idea of what children are/should be reading and who should (or should not) be writing for them in The Guardian this week. And since I rarely lack things to say about either books or “small units” (as Hanna calls them), I figured I’d put in my two cents. 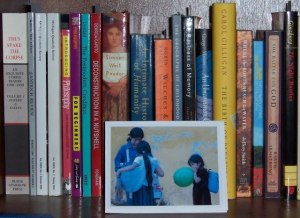 Amelia Hill’s story, “Kids learn to love living on the edge,” charts the trans-Atlantic publishing success of a book called Fifty Dangerous Things (You Should Let Your Children Do). One of the book’s co-authors, Gever Tulley, defends the work this way:

Of course, we must protect children from danger – that’s the promise we make to them as a society. But when that protection becomes over-protection, we fail as a society, because children don’t learn how to judge risk for themselves. So we must help them understand the difference between that which is unknown – or unfamiliar – and that which is truly dangerous.

Meanwhile, Imogen Williams maintains that “adult” authors should refrain from writing books for children. “There really is a Great Divide between writing for adults and for children, and it’s a rare writer who can skim effortlessly back and forth between the two,” she passionately argues, pleading with authors to pick an age bracket and stay with it.

What I find noteworthy about both of these stories is the assumption on the part of the authors (and, presumably, the majority of the audience they are writing for) that a) adults have some measure of responsibility in policing the reading choices of the young, and b) that the books that will appeal one age group will not appeal to another.

While I am not opposed to the idea that parents attend to their children’s reading interest because, well, they’re interested in their children (I pay attention to what Hanna reads ’cause I’m interested in what she’s thinking about and more often than not something she picks up will end up on my own “to read” list) I’m opposed to any sort of censorship of children’s reading choices whether explicit or implicit: kids should have the right to pick up (and, it should be noted, put down again any book they take a fancy to (or lose interest in).

And as to the question of whether authors who are good at writing books that supposedly appeal to one age group over another, I’d like to be the first to raise my hand and suggest that some of the best genre literature I’ve read in recent years was marketed at a young adult audience. I remember, too, as a child, my aunt plumbing my brain on her semi-annual visits for book recommendations, as she liked to keep a stack of “children’s” books by the bathtub for leisure reading. The idea that there is some age-based dividing line between books for young people and books for older people is a cultural construction rather than an immutable fact. Some plots may appeal to us more or less depending on our own immediate circumstances, and what speaks to us may change over time. But any one book will speak to those for whom the story appeals, regardless of the age of the protagonist, the complexity of the language, or the number of illustrations.

The immortal Arthur Ransome, journalist, bohemian, novelist, fisherman, resisted the idea that he was a children’s author, despite the fact that his phenomenally popular Swallows and Amazons series has delighted young fans worldwide since they first appeared in the 1920s. He always maintained that although he wrote about children, he wrote — first and foremost — for himself: he wrote about the things that interested him, and gave him pleasure. “I was enjoying the writing of this book more than I have ever enjoyed writing any other book in my life” he once remembered about the experience of writing the first Swallows and Amazons novel. “And I think I can put my finger on the thing in it which gave me so much pleasure. It was just this, the way in which the children in it have no firm dividing line between make-believe and reality, but slip in and out of one and the other again and again.” Still, he maintained, this was not a quality limited to children as, “I rather fancy, we rather all of us do in grown-up life.”*

So go forth and read (or write) what you enjoy reading (and writing). I’d suggest the world might be that much better if we quit worrying so much about what other people choose to read and write.

That’s my thought for the day.