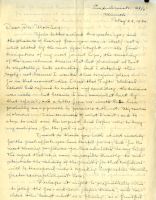 My “from the archives” item this time around is actually from Hanna’s work at the Center for the History of Medicine (aka “CHOM,” the noise refined zombies make when gnawing on their prey), a special collections unit within Harvard Medical School’s Countway Library.

Hanna was asked by her supervisor to write a blog post about some of the materials in the collection she recently finished processing — the personal papers of one Dr. Hyman Morrison (1881-1963).  She chose to write about a cache of letters Dr. Morrison kept from a medical student, Lewis Chase, who was an American studying in Munich and Berlin between 1929-1934. Hanna writes:

Chase was extremely adept at recognizing and commenting on contemporary German political rhetoric and noticing the tensions and potential for tensions between native German and “foreign,” often Jewish American, students at the unversities in Berlin and Munich. In December 1930, for instance, Chase wrote of an influx of American students: “Of the newcomers to Berlin, all are Jewish, with the exception of one Harvard negro—two or three from Boston, many from New York and its immediate vicinity. … Actually there have taken place a number of disagreements, happily only verbal, among the students; a protest against the ‘incessant, loud English-speaking carried on in the Anatomy laboratories’ has already been filed by some reactionary native students.”

You can read the rest of her blog post over at CHOM’s website. Go enjoy her stories (and help up the amount of traffic her contribution to the website receives!).